who is Daigo Saito!!

another my favourite D1 drifter becoz he used a Xseries,and the story on how he begin drifting is quite interesting.. 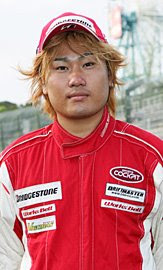 From an early age he was into motorbikes as his father was, and got his motorcycle license at 16. One night when he was out riding with his friends they stumbled upon a drift meeting in the hills of Karuizawa, there he saw a white Mercedes-Benz saloon drifting. From then on he wanted to drift himself and he wanted to drift a saloon. As soon as he was 18 he got his drivers license, his father did not want him to drift so bought him a Mini Cooper as his first car. At this time he didn't know that it wouldn't be a good car to drift so he tried, and ended up writing it off. He then bought a Nissan Silvia S13 without asking his parents and set about practicing, his first practice session lasted 36 hours only stopping for food and fuel. He learned a lot from this first practice session though he totalled the Nissan Silvia S13 a couple of weeks later.

In 2005, Saito won the title for privateers

Unlike most D1 drivers his work is not connected to his drifting, as he lives and works at a nursery school, though he is mainly in charge of the animals he is also in charge of driving the bus when the kids go on outings.

He started competing in the D1 Grand Prix in the third round of the 2004 season in his red Toyota Mark II JZX90 since then he has improved steadily, 2007 being his best season so far as he finished seventh overall despite a large crash with Masato Kawabata. 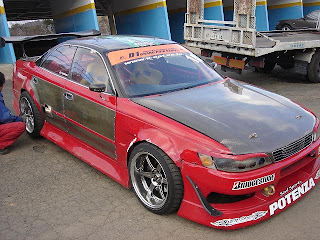 jzx90 that was totalled during battle with kawabata s15..(Wtf check out the exhaust coming out from the rear door??)

if u think thats bad,check out his other car JZX100 that he used for local drift event 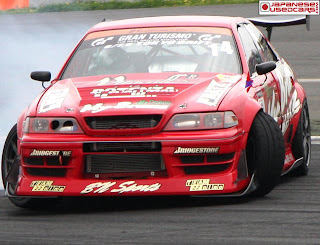 currently drifting this MarkER Jzx100 during D1...800hp + body weighing only around 1300kg..
Words from the brain of singbluesiliver at 8:04 PM