Been browsing Tezuka blog for sometimes..he always posted this white r34 rebuild process..at first i thought its his customer car..(me too lazy to translate from japanese to english..hahaha) until i saw a picture of a koyo radiator inside the white car engine bay with tezuka name on it(powered by RB25 anyway)..this car will be used by Tezuka for D1 Street Legal event..he was able to score third place in the D1 Street Legal Rd.6 at Sekia Hills (sources from speedhunters)..i think (or maybe to replace the yellow R324 in D1GP)..so what's gonna happen to the gold R34 4doors he used for other event??beats me...he got way too many cars for Drifting..all i know he still keept his pink JzX81 a.k.a Freedom spec at his garage..he said its too precious and too many memory to be sold off.. 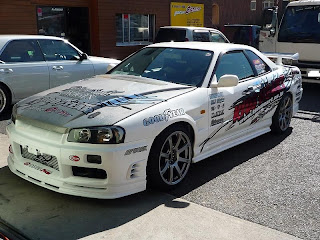 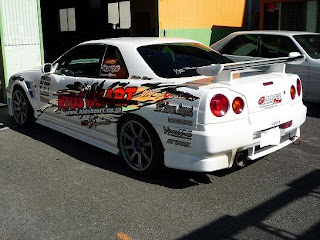 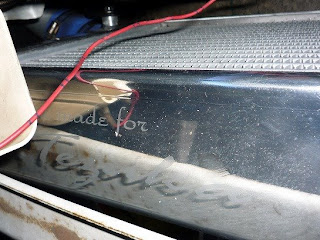 Special made for Tezuka by KOYORAD..huhuhu
Words from the brain of singbluesiliver at 6:09 PM 0 say the word

welcome back my frens...

its been almost 6month and for some a year,since i last saw them in action...the time for hibernating and upgrading their cars is almost over...so now there are back...will be terrorizing event soon..here some of the pic of their car and mods during their time out from drifting
(picture are taken before the upgrade process) 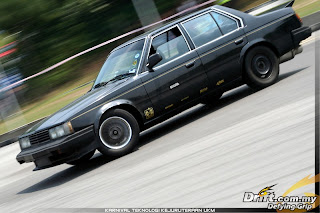 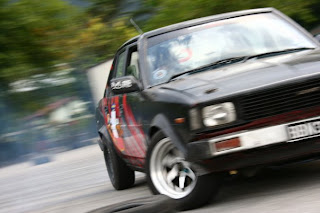 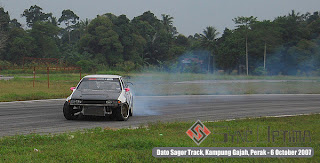 Prince in the Bull Fights.. 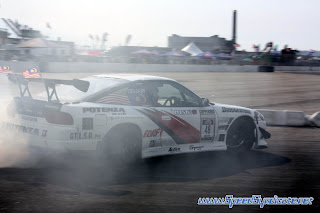 Our P.O.D (prince of drift) Tengku Djan went to State's last Weekend for Red Bull Drifting World Championship..he loss in the best 16 to Sam Hubinette..anyway its a good job representing Malaysia against the world in Drifting...kudos to u...
the top 3 winner are..
1st Rhys Millen
2nd Daijiro Yoshihara
3rd Tanner Foust
hmmm why all are american...
for full report and coverage on the event u can check out
http://www.princeofdrift.com/
http://www.speedhunters.com/
http://www.formulad.com/
My Fellow JZX81 owners are also spotted in the event... 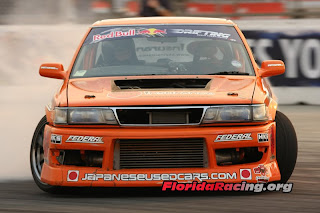 Crazy Smoking bad ass...Ben Broke Smith a.k.a Bon Bon ok UK from http://www.driftworks.com/
sadly the car have problems with steering pump and cant smoke his way out...eliminated in the first round of best 16 to Darren McNamara..
Fellow american with MX83 Cressida from http://www.jzx81.net/ and http://www.jzxproject.com/ 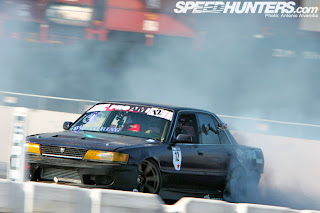 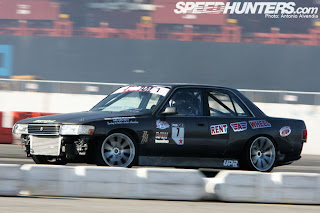 From Arizona..
too bad Daigo Saito couldnt make to this event...
Words from the brain of singbluesiliver at 5:21 PM 0 say the word

regarding the skyfiro...bloody hell the owner....yesterday when i ask u to check the stuff u look,u said its okay...then u call...and said the bracket is broken...and so on so on....fuck u
Words from the brain of singbluesiliver at 6:44 PM 0 say the word

Remember i posted before about another KE70 4age swap beside Heri's...well its done already...only awaits to do minor wiring on the dashboard and front & rear light.. 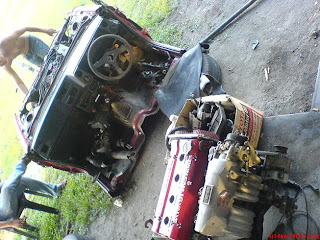 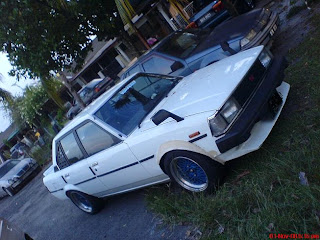 Anip KE70 is now equipped with 16v
monday,received a call from my friend Pdot, while i was busy playing badminton..haha,saying his officemate,Jon accidently bang over a skyline with his waja...fuhhh..i was hoping let it not be a r34 or r35 otherwise he might just have to sell the car and work overtime to pay the owner...lucky it was only a skyfiro (skyline + cefiro) converting to r32 facelift front and back...(its GTS facelift but the owner keep claiming its GTR...duh...im wasn't born yesterday okay.. i dont a nissan but surely i know the different.) 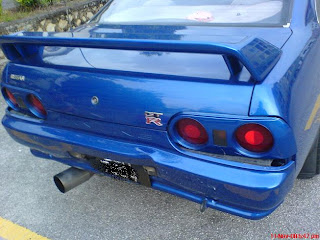 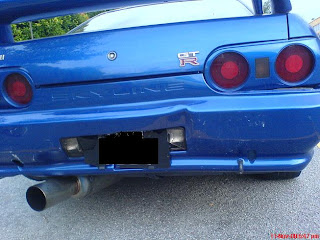 the damage...owner wanted a bumper and both light replaces...(actually it can be repaired..dented bumper and minor crack on the light..but i understand,if im in his place,i will probally do the same)
what bugs me is the bumper,he keep on saying the bumper is R32GTR different from R32GTS model..he claim GTS got no light on the plate number holder...so i called a few of my friend asking and search the net..viewed almost 20 to 30 pic comparing the bumper...and i conclude...only some spec of R32 GTR bumper have a red light on the side..other its all the SAME!!!Duh...again...
Thanks to Din Nismo,i already got the bumper and the light...costed around rm450..only thing now is to wait for the owner qoutation on the paint..
one thing settle...the other one is Jon's waja... 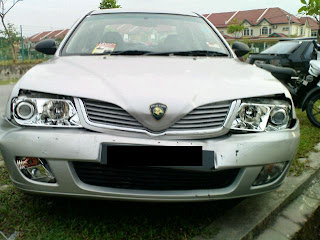 front light,bumper and grill... out 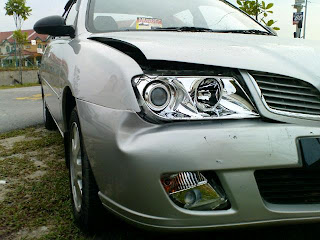 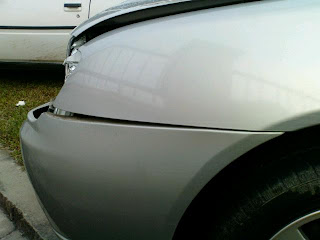 fender is okay...
it look kinda bad compared to the skyfiro..as he is on a tight budget...will be repairing this by end of the month..got my friend wanna sell his extra front light and a bumper..the front bonnet,i think it can be repaired..hmmm plus paint...i think it should be cheaper than we expected..
Words from the brain of singbluesiliver at 5:34 PM 0 say the word

i didnt planned it...i took the markER out to Cikgu Iz house,then he went inside and came out back with a camera and started taking picture...after editing...here a some of the pic that i think was awsome!thanks Iz.. 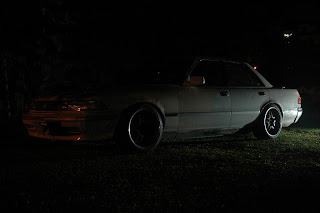 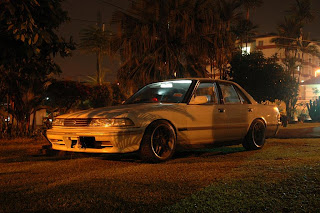 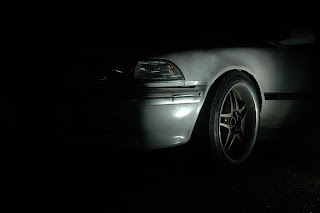 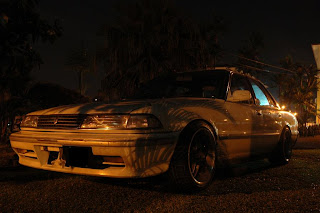 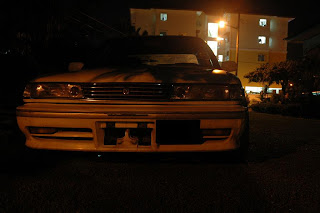 Words from the brain of singbluesiliver at 7:41 PM 0 say the word

i leave u now for the moment...

starting today,there will be no more modification the markER,coz now would be the best time that i start to saved up my money and become ultra "kedekut" to buy 1jz gte manual engine...it will be tough this time,estimating the halfcut price around rm6k -rm7k...fuhh its gonna be a long long time before i can manage to saved that much amount..gonna miss modding markER...
Words from the brain of singbluesiliver at 11:31 PM 2 say the word 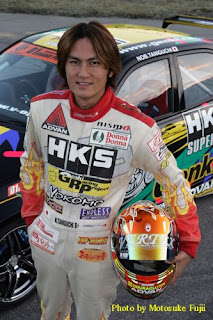 Nobuteru Taniguchi (born May 18, 1971, Hiroshima) is a Japanese racing driver and former drifting driver who currently competes in Super GT. Taniguchi is commonly nicknamed "NOB" (abbr. No One Better) or "The Pimp" as a reference to his S15 Silvia which he is best known for.
Taniguchi began his motorsport career when he was racing minibikes and won a Honda sponsored All Japan Mini Bike race, which took place at its Suzuka Circuit.[1] Taniguchi would progress into four wheels and became interested in drifting when he acquired a Toyota AE86.[1] He also worked at Takahiro Ueno’s car bodykit company, Car Make T&E to supplement his racing career whilst competing in carious one make series racing in Toyota Celica and Vitz and partipicating in drift events.[1] In 1999, he came into the attention of HKS when he won a Suzuka Clubman Race in a Honda Civic sponsored by Bride. HKS signed him up as a test driver and as a sponsor, as well as sponsoring his S15 Silvia for drift events.[1]

were it all begun..
Taniguchi competed in the national Super Taikyu series and the D1 Grand Prix which he would take the title that year and would compete in the JGTC first with RE Amemiya RX-7 which he still compete in all these of these series. Also he took part in the 24 Hour of Nürburgring and the Macau Grand Prix Guia Touring car race. He has since became one of the fan favourite drivers in Japan.
He was also a test driver for HKS in 2004 and 2007 where he drove the HKS Time Attack Mitsubishi Lancer Evolution 7 and set a 54.37 second lap time at Tsukuba Circuit (famous for its complexity and focus on cornering skills), and again in 2007, where he drove the all carbon fiber body HKS CT230R Mitsubishi Evolution and set the current Tsukuba Time Attack record of 53.589 seconds (video). Mid way through the 2004 season of D1, NOB switched to an Altezza which had not been properly setup and had shown some technical issues that many believe cost him the championship that year. During the 2005 season, the switch to Altezza was proving to be a mistake for HKS and NOB which lead them to quit the series at the end of the season. 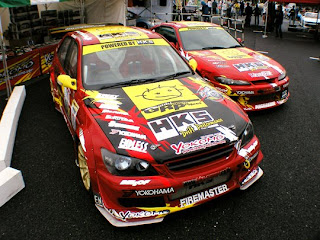 Taniguchi drift machine HKS altezza and HKS s15
In all, Taniguchi has gone through four cars with HKS for D1, the RS1 Hyper Silvia S15 (Crashed by Keiichi Tsuchiya), and two RS2 Hyper Silvia S15s (One from HKS Power Japan, and the other from HKS Europe), and finally the Genki RP Altezza, which was designed without experimental/prototype HKS parts, for the purpose that a private drifter could copy the car. His recent drift car is a Toyota Aristo (Lexus GS300 in US). Taniguchi had the most wins in D1 Grand Prix until his tally was overtaken by Youichi Imamura in 2005.
As of 2007, he currently competes in the Super GT series in a Porsche 911 GT3 for Team Taisan. 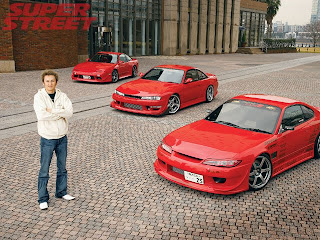 taken this awsome vid from rob roadsterdrift blog...a nice run by the jap jzx drifter..esp during the second run!

Words from the brain of singbluesiliver at 7:58 PM 0 say the word

feel like posting this video....its a "young version" ae86..i always like levin over trueno facelift..and with a bodykit like vertex,its just make me wooo....maybe seeing 2 Ae86 halfcut at HerihomeGarage (gonna be swap into a KE70) just make me thinking about hachi-roku hehe..but with an insane price tag over rm30k for 198* something car...kinda turn me off...

Words from the brain of singbluesiliver at 4:58 PM 1 say the word 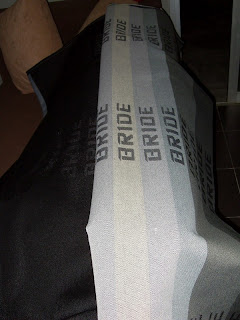 i been searching for this fabric for a long-long time..thinking of putting to my KE70 back then..finally drift house selling but...at rm150 per metre... 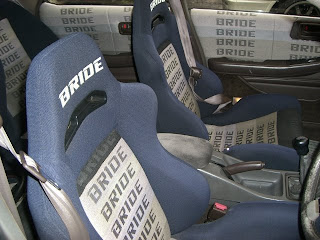 this is how it look on a X81...nice ek...its like Louise Vuitton (LV) but for cars hahaha
Words from the brain of singbluesiliver at 7:35 PM 0 say the word