Like many of the other D1 drivers he owns his own tuning garage called Koguchi Power so does all of the work on his car himself. He has a great following of Nissan 180SX enthusiasts as he is one of the top 180SX drivers, also his car is the same one that he started out in. Another reason the fans like his car is that it mostly uses of the shelf parts that anyone can get hold of. His nickname is 'Emperor'.

He has been competing in D1 since it began in 2001 and consistently scored points in his Nissan 180SX in the first 3 seasons. He then switched to a Nissan Silvia S15 sponsored by tuning firm High Power Improvement, he did not do well in the car or the Toyota Chaser he used after. So in 2007 he changed back to his trusty 180SX and has been doing very well, if not very consitantly. Usually if he makes it into the top 16 he will score big points, gaining his first win in round 2 of the 2008 season.
During 2006 D1gp Allstars at Irwindale he drove a Falken Jzx100 chaser..but he didnt do well and that is the first and the last i saw that car in action again. 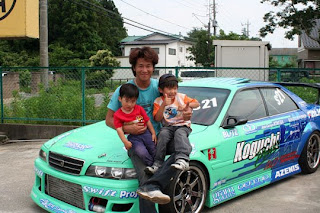 Words from the brain of singbluesiliver at 8:03 AM