He maybe not as famous as Orido or Taniguchi,but Tsuyoshi Tezuka have come a long way even before D1 one era, he's also the early drifter who started drifting with super angle along side Koguchi and Haruguchi.. If Daigo Saito is the Icon for Jzx90 and Jzx100, Tezuka is the person responsible for bringing up Jzx81 to the international drift scene..if u dont believed me,u can ask any hardcore fan of jzx81,surely somehow his name would pop-up... Enough about the Jzx, and moving to the machine that have served him for a quite some time now,and sadly now is put to rest the B324R (Bee Racing R32 + 34 Facelift)...and till these day is the only GTR in the D1gp...with the legendary powerful heart Rb26dett under the hood,(not sure of the spec)its still stay strong competing in the next level of drifting... 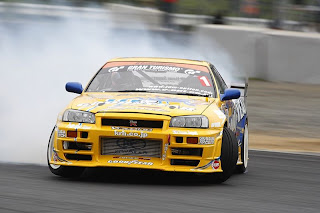 super angle,what did i tell u hahahahah 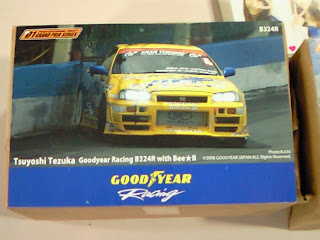 from the poster,can u spot something that is ultra cool?? the Gt wing are grinding the side wall of Ebisu Track,this show just how mad Tezuka drive his car
Skyline have always been my all time favourite car (second is Jzx100!! of course hahaha) ..either its 2 door or 4 door,gtr or gts as long is a R32.... to tell ya the truth im not a fans of R33 or 34... they just dont have the strong aura like the R32 hehehe..but then again is just one man opinion hehehe..
Words from the brain of singbluesiliver at 5:04 AM