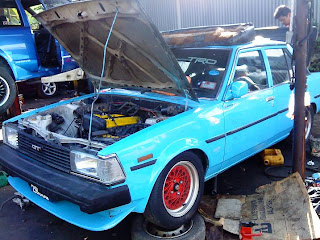 On saturday a visit to Sg. Besar, Sabak Bernam to check out Ipin KE70 4age engine conversion,At first Ipin wanted use a carburetor version of the engine (which i totally disagree) saying its cheaper..but ditch the idea due to many trial and error process involved, making it not worth it..(a little history about the engine he bought from the chopshop..it is assumed that the original wiring on the 4age was destroy in a fire due to short circuit,becoz what left of wiring got burn marks..) the car progress is around 90 percent complete,only awaiting for wiring and ecu from a donor car..oh btw the engine is running on a 4k gearbox instead of the original t50 transmission..we'll see how its goes within another 2 weeks when he come back to kajang..
Words from the brain of singbluesiliver at 8:15 PM